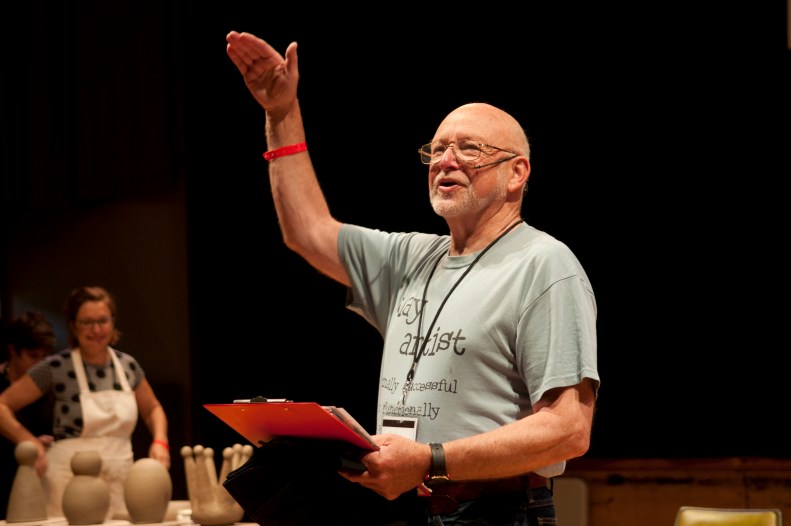 Image: Jim Robison with Virginia Scotchie in the background 2013

Jim is an elected Fellow of the British Craft Potters Association, former Chair of the Northern Potters Association. An enthusiastic maker and educator, Jim has taken part in every Aberystwyth Festival and been Master of Ceremonies for most of them. Jim has written for Ceramics publications and is author of Large Scale Ceramics, and co-author of Slab Techniques. Raised and educated in the USA, he moved to Yorkshire in 1972, and established Booth House Gallery and Studio in Holmfirth. His own work is usually slab built using personal construction techniques combined with unusual surface textures using multiple layers of clay and glaze. In 1990 Ingrid Murphy graduated from Crawford School of Art and Design, Cork, in 1992 she completed her MA in Ceramics at at Cardiff School of Arts & Design where she is currently the academic lead for trans-disciplinarity. Her research is in maker culture and interdisciplinary education, she is also undertaking a British Council Research project in China. Ingrid Murphy has had the role of Master of Ceremonies for the Festival since 2007, alongside Jim Robison. This year she will be giving a lecture about her recent body of work which you can see in Gallery 1 of the Arts Centre during the Festival weekend. The exhibition ‘Seen and Unseen’ is part of the Language of Clay series curated by Ceri Jones featuring Ingrid’s recent work where she has collaborated with others on digital fabrication technologies.