Liming Zhang graduated from the Sculpture Department of Jingdezhen ceramic University in 2011. Together with Mr.Masakuzu Kusakabe he built China’s first smokeless woodkiln at The Pottery Workshop in Jingdezhen in 2008. (Masakuzu Kusakabe  was a demonstrator at the ICF in 2009). In 2010, he produced a mini wood kiln which could be used for firing that became his design for graduation. In 2012, Zhang Liming began studying sculpture kiln with Taiwan artist Wu Qizheng. A number of sculpture kilns were produced after multiple firing tests between 2012 and 2014.
In 2016, they set up our own studio in Jingdezhen. The studio mainly provides technical support for the course activities on firing and the construction of firewood kilns. Since 2017, mini kiln courses and activities have been opened in Hong Kong.

Liming will be demonstrating how to make his mini-kiln at the Festival. 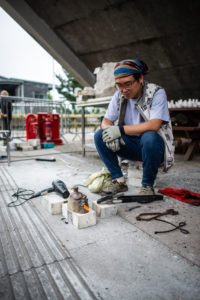