The Potterycrafts Lifetime Achievement Award is presented to a potter or ceramist who has done much to promote the ceramic arts during their life. The recipient of this award is selected from proposals made by the guests and visitors at the previous festival. The award is kept secret until it is announced during the Official Opening of the festival on the Friday evening of the Festival weekend. A piece of ceramic work is made by a notable ceramicist is presented to the recipient during the Opening Ceremony.

The 2017 Award was awarded to David and Margaret Frith 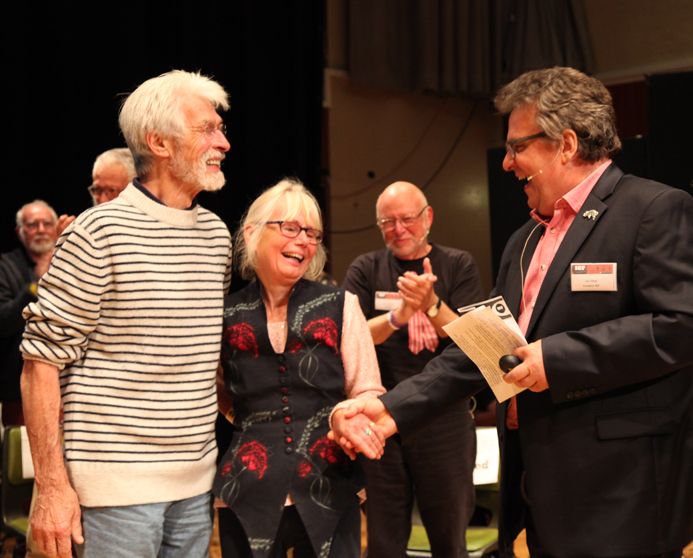 David and Margaret Frith met at Stoke-on-Trent College of Art where they were trained by Derek Emms who introduced them to the oriental tradition. Together they set out to establish a pottery business in Wales, drawing on local traditions. The first few years were financially difficult, they had to hand build or press mould everything as they had no potters wheel. Eventually they acquired and restored an old Buckley wheel and produced oxidised stoneware, employing a number of assistants. They used locally sourced clay including waste by-products from local factories to make domestic reduced stoneware, decorated with wax resist and glaze trailed designs. In the mid 1970s the Friths moved their home and workshop to an old millhouse now called Brookhouse Pottery in Denbigh, North Wales and no longer employed assistants though they continued to run summer schools and workshops for students. They spent 5 weeks in Japan in 2000 at Mashiko, a pottery community where they enjoyed learning about the use of domestic ceramics in Japanese culture. For over 50 years they have lived and worked together, developing their pottery business while raising their family and restoring derelict buildings, in rural Wales.

The 2017 award was a sculptural ceramic piece specially made by Walter Keeler.

If you wish to nominate someone that you think has made an outstanding contribution to the world of ceramics, for the 2017 Potterycrafts Lifetime Achievement Award please send your nominations to:

Or email aafstaff@aber.ac.uk with the subject title of the email: 2017 Potterycrafts Lifetime Achievement Award.