The Potterycrafts Lifetime Achievement Award is presented to a potter or ceramist who has done much to promote the ceramic arts during their life. The recipient of this award is selected from proposals made by the guests and visitors at the previous festival. The award is kept secret until it is announced during the Official Opening of the festival on the Friday evening of the Festival weekend. A piece of ceramic work is made by a notable ceramicist is presented to the recipient during the Opening Ceremony.

The 2019 Award was awarded to Magdalene Odundo. 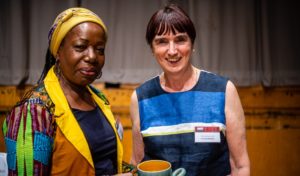 If you wish to nominate someone that you think has made an outstanding contribution to the world of ceramics, for the 2021 Potterycrafts Lifetime Achievement Award please send your nominations to:

Or email administrator@icfwales.co.uk with the subject title of the email: 2021 Potterycrafts Lifetime Achievement Award.