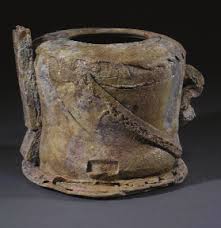 Don Reitz was born in 1929 in Pennsylvania and is recognised as one of the most important and influential ceramicists working today. He has pursued a life-long investigation of both salt and wood firing, and through long experimentation developed a range of colours and surface effects previously unknown in salt-firing. Among many awards, in 2002 he received one of the highest honours in his field when the American Craft Council awarded him their Gold Medal. ‘Over the years, time has allowed me to manipulate my forms and surfaces with some degree of innate intelligence and personal satisfaction. Time, an essential ingredient in firing, hardens and colors the clay, but also gives me time to think and look inward. Time has enabled me to bring to my work a personal uniqueness, a clarification of purpose. These works serve as a bridge which allows me to move freely from one reality to another. In the interface I am free of convention, opinion, and burdensome history. My work becomes a personal iconography enabling me to visualize and organize my information. My marks are there in the clay. My signature.’ Don Reitz will also be giving the Festival’s Michael Casson Memorial Lecture – see the programme pages for the timing.