Loucia Manopoulou is a curator and researcher who works across the fields of design, craft and contemporary art. Loucia has worked in a wide range of creative and cultural environments for more than 20 years, both in Greece and in the UK, including commercial galleries, museums and the Athens 2004 Olympic Games.
Examples of recent projects include: Sounds of Making (2018) an interactive installation to complement Cara Wassenberg’s (metal-glass) exhibition at Farnham Pottery; The Leach Pottery: The Sound of it (2017) exhibition at Crafts Study Centre. The exhibition was well received by the CSC’s visitors and received a positive review from Crafts magazine (March/April 2017). Loucia holds an MRes in Crafts (2017) from the University for the Creative Arts, Farnham, and an MA in Design Management (1999) from the Surrey Institute of Art and Design University College. Currently, a PhD candidate at the University for the Creative Arts (2017-2021), exploring contemporary British Crafts, Curatorship and Performance. 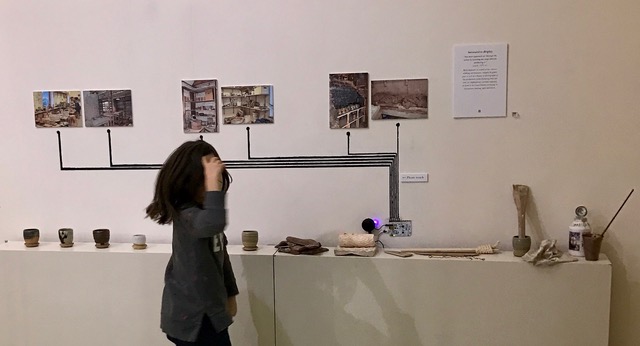 Abstract:
‘Performance Art within Crafts”
My PhD project aims to examine performance art within crafts, and analyse the role of the curator in contemporary collaborative crafts projects which culminate in live performance. The research interrogates the emerging shift in the central concept of crafts practice, from objects to gestures, while addressing cultural, social and environmental concerns. The project considers the role of the curator, while accentuating his/her contribution to experimentation and use of cutting-edge technology, “showing that traditionalism and innovation are compatible, not oppositional” (Adamson, 2013).
This specific presentation examines two contemporary ceramicists who are following the recent developments in craft theory moving the focus of crafts beyond the specific realm of the object. Ashley Howard deals with artistic gestation, suggesting spiritual traditions of ceremony; Mirka Golden-Hann incorporates digital technology into presenting her works expanding and challenging its broader historical context and tools. At the heart of both of these, seemingly different, practices lies a dedication to clay, informed by commitment to experimentation and deep knowledge of processes and materials.