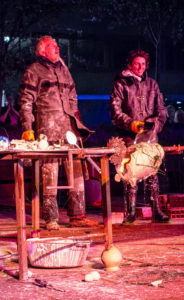 Jean-François Bourlard began his professional training of traditional wheel-throwing in1996, at the EMA CNIFOP International Centre for Training in Crafts and Ceramics in Saint-Amand-en-Puisaye, France. He gained experience in workshops throughout France and Germany, until 1999 when he returned to his hometown of Sadirac to set up his own practice.

In 2012 he won the Ateliers d’Art de France Foundation Award with his piece called ‘l’Oeuvre’. The award funded further experimentation in his work and launched punk raku into international recognition..

“My work explores the limits of the ceramic medium, whether in the form of vases, sculptures or installations.

I manipulate the forces and movements produced during firing, while adapting to specific kiln conditions (electric or gas). I create juxtapositions of glazes and enamels on stoneware and porcelain, while also experimenting with the positioning of pieces within the kiln (by suspending, on a spindle, etc).

Since 2014, Jean-François Bourlard and Valérie Blaize have worked together, developing their “Raku Punk” performance

“The rhythm is frantic, objects are manipulated bluntly, taken in and out of one kiln or another to get their cracked coat of glaze and slipware.  All along the performance, a wild, colorful and absolutely dysfunctional table is set for two. Dinner is served: a glaze soup, a fire tajine, and a spluttering cake… Our happy ending is of course a punk ball!”