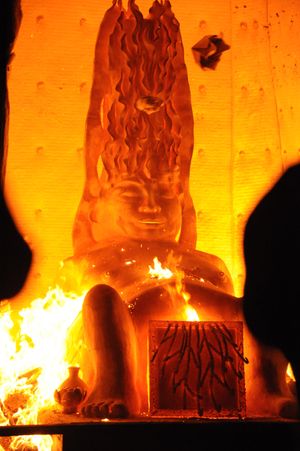 Rita Gudino is a Professor at the University of the Philippines, College of Fine Arts (UP CFA), Quezon City, Philippines. Rita draws from the strong, as well as the most mundane, experiences to create her work. She is motivated to express and share the many aspects of herself through art: as a wife, mother, teacher, administrator and artist. She will be building a sculptural LUAL kiln and firing it in a performance firing during the Festival. This will be a raku kiln in the form of a woman giving birth to the clay figures fired within during a special performance on the Saturday. She will be also hosting a special workshop on 23rd June to make clay babies to be fired in the kiln during the festival. “The objective is to transcend the firing process into the art form itself. LUAL is a work that is no longer an object but a process. It will create the conditions for an experience, revealing the metaphorical assertion that the force, power, primacy and anticipatory wonderment of kiln firing is birthing. LUAL is a ‘Magnificat’ to the woman’s role in bringing forth life, which is nothing short of being a miracle, offering life to yield life.”