Magdalene Odundo was born in Nairobi, Kenya and educated in Kenya and India. Coming to Britain in 1971, she studied in Surrey and at the Royal College of Art.

She has travelled throughout Europe, America and Africa, drawing on sources as varied as the pottery of New Mexico, the body art of Central Africa, and the forms of early Greek sculpture. Her work is highly regarded and is represented in major national and private collections including the Art Institute, Chicago, the British Museum, the Ashmolean and the Victoria and Albert Museum.

Odundo’s work is hand built, using a coiling technique. Each piece is burnished, covered with slip, and then burnished again. The pieces are fired in an oxidizing atmosphere, which turns them a red-orange. A second firing in an oxygen-poor or reducing atmosphere causes the clay to turn black. It is debated whether her work shows evidence of her African roots or whether it is universal in character.

A major exhibition of her work: Magdalene Odundo: The Journey of Things is now showing at the The Hepworth Wakefield, UK. This features over 50 of Odundo’s vessels on display, alongside a large selection of historic and contemporary objects which have influenced her-including some pieces loaned from Aberystwyth University’s Ceramic Collection. 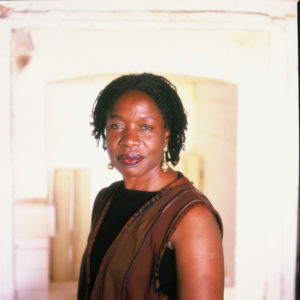