Terry Davies was born in the Welsh border town of  Shrewsbury, Shrophire in  1961. His passion for clay began aged 11 and by the time he was 19 years old, he knew how to throw and control clay into any form needed. He gained a further artistic form of training from his extensive travels,  starting with a period on Green Island Dorset, where he learned the techniques of salt and soda firing with Guy Sydneham. After a years’ stay in the French pottery village of Laborne, his passion for wood firing had been seeded,  this was by far the most influential chapter of his long journey.

On his return to The U.K in 1992, he set up the Stapehill Abbey pottery, where he first started playing with his textured “Pelle di elefante” surface. Not being content with a stable situation, his travels took him on  Australia, New Zealand and South East Asia. He finally settled in Italy in the Tuscan countryside, where now 20 years on, he  is well known in the international field of ceramics, with many articles written on his work. He has won many awards and prizes and his work features shown in many European galleries and  museums, public and private collections. He is known for his performance firings throughout Europe, which never fail to spellbound his public.  In 2018 Terry celebrated his 40th year since beginning his apprenticeship, holding two major personal exhibitions in Italy.

“The most  important aspect of my working life  is as a maker, I am a potter first. I experiment during each process of making and firing. Fire has always been passion, and I use this medium to break the barriers in my  home of Italy, language, culture, heritage. From primitive Etruscan kilns, to modern day materials such as glass bottles, cotton sheets, or newspaper. The fire lights up the eyes of the young and old, and puts us all in a feeling of warmth and safety.”

He will be making kilns for the garden during the 2019 Festival.

“During the festival we will be building and firing a range of paper and cotton sheet kilns in various sizes. These kilns can be made and fired very simply with most materials being found in everyday life. (With the exception of just a few old kiln shelves). The paper kiln can reach 1100 degrees, and with the use of different clays, stacking materials such as seaweeds, oxides and salts, a huge range of colours and effects can be achieved.
The effect of reduction on the raw clay is very important, and so we keep the kilns under as much pressure as possible, and this gives us the wonderful display of dancing flames, during the evenings’ performance.” 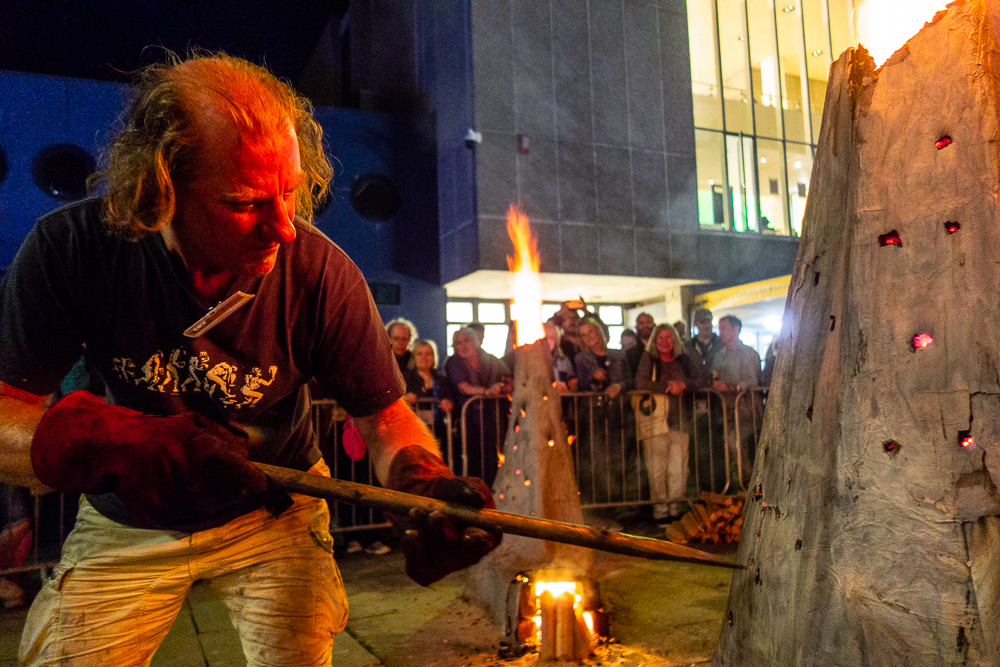