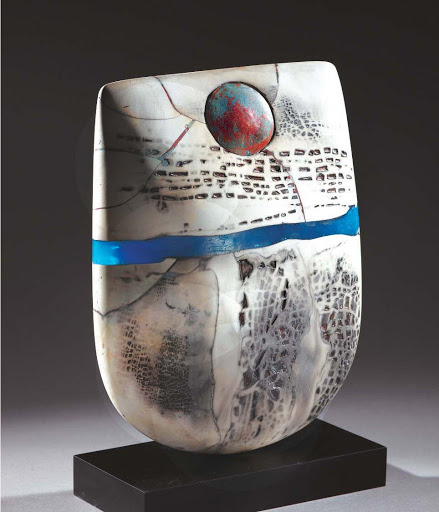 ‘…. One of the major introductions I had to ceramics was digging Neolithic iron age and Roman Samian shards on archaeological digs somewhere in Wales while trying to survive as an art student in Birmingham. I am naturally drawn to shapes of artefacts and objects from other cultures and other times, but that remain timeless. Erosion and change through time and nature are recorded in a piece. My main aim in my work is not to compete with nature; but for the work to evolve within the environment. The minerals, like iron and copper; that I introduce into the ‘Raku’ ceramic surface have their own effect on the clay during the time they are submerged in the river or the sea… Each individual piece takes on its own developing surface; its own history and its own aesthetic. I am merely the maker.’ Peter Hayes began his career in Cornwall, spent a decade in Africa, and has studied traditional techniques alongside craftspeople in Korea, Japan and India. At the Festival, he will be demonstrating how to build a high quality affordable Raku kiln, as well as offering hands on opportunities!